Birds of a Different Feather Sticking Together

My wife and I enjoy birdwatching. For us it is what the birds do that is exciting, how they live their lives. We enjoy watching the actions of paired birds nesting and raising young. We marvel at the group dynamics within birds of the same kind and how different species interact. It's been a shared passion for almost 20 years now but only recently did knowing exactly what birds we were watching became important. Identifying the birds we saw became an exciting new part of our birdwatching experience. (One made easier and more enjoyable by the good folks at Whatbird.com)

The reason I mention any of this is to illustrate that I may not know the difference between a Green Heron and Least Bittern but I didn't just wander into the wetland yesterday. I've been doing this for awhile, almost a lifetime in fact, long before I met and married a woman with similar interest in our feathered friends. I've seen a lot of bird behaviors, a lot of bird relationships and a lot of interaction between birds of differing species over the years.

On Thursday, September 6th, 2012, my wife and I witnessed inter-species behavior unlike anything either of us have seen before. It was as baffling as it was enthralling, made even more so by us knowing the species of only one type of bird involved - a Mallard. The other was a mystery to us at the time but thanks to Whatbird users confirming my own research I now know was a Hooded Merganser. Not that knowing the mystery bird's identity made the behaviors we witnessed any less amazing. 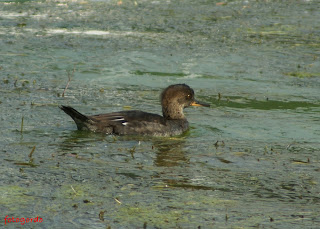 Here is the story of what we saw...

While walking a path in a Hamilton Ontario waterfront park near a marina on the shore of Lake Ontario my wife and I came across a large group of Mallard ducks sitting on a rocky stretch of beach in the shade of some large willow trees. Numerous mallards and other birds live year-round at the park so seeing a group of mallards isn't uncommon. It was noteworthy that so many birds were peacefully coexisting in this group. Usually they keep to much smaller groups - from two to a dozen birds.

There were maybe 50-60 mallards in this group, calmly sitting on the beach or drifting lazily in the shallow water nearby, water turning various shades of green due to high algae levels. Seeing mallards in these and greater numbers is a common sight later in the fall but this seemed early for these normally quite quarrelsome birds to be hanging out together. We decided to hang out ourselves and observe the scene... partly because we were curious. Was it some instinctive per-migratory flock building (even if they were early and most were probably 'year-rounders' anyway) or perhaps the duty of moulting is better in the company of others? Did the algae bloom have anything to do with it?

We never did reach a conclusion about why so many mallards were together in this one spot because a more compelling mystery was revealed when the ducks became aware of our small dog accompanying us and a number of them casually stepped into the water. It was then we noticed one of the mallards wasn't a mallard at all - it was a female Hooded Merganser. At the time we didn't know what it was but we knew it definitely wasn't a mallard. We saw it before we actually saw it as the next picture proves. I took the shot just prior to my wife and I simultaneously spotting the "mystery bird" (Hooded Merganser) as it entered the water. 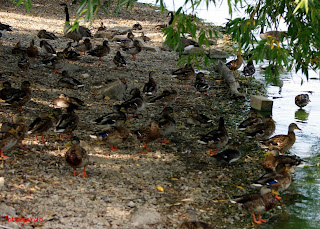 We'd seen the sketchy looking Canada Geese in the background of course but it wasn't until I loaded the photos into the computer at home that we realized our little mystery bird had been sitting amid the ducks all along.

We watched and within seconds it became apparent the little bird was completely at ease among the mallards which were obviously not of its kind and considerably larger in size. Even more compelling was the smaller bird's attachment to one particular mallard among the many. It was a male, a drake. Like lots of waterfowl around the lakefront he was sporting rather drab plumage lacking the trademark green head of its kind. The mallard seemed not at all concerned at being closely tailed by the smaller bird. In fact, the two seemed so at ease and connected in their movements they appeared almost to be a couple. 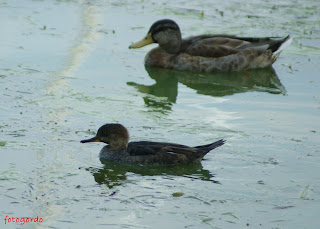 We suspected the mystery bird to be female, a guess based mostly on the uniform overall drabness of its plumage and the 99.9% sure knowledge the mallard was male. We didn't think it was possible they were connected with the ultimate goal of raising young but it wasn't beyond the realm of believable acceptability to consider the possibility they thought that way. Maybe it was some kind of mutually beneficial partnership, an alliance of chance or a benign inter-species companionship ignited by some random genetic trigger. Whatever the reason, it was obvious the mallard and its little companion were a functioning unit of two amid the numbers and personal dynamics of the rest of the mallard flock.

The mallard cruised slowly through the water dabbling his bill into the surface blooms and algae foam and its little companion did the same despite possessing a bill that looked anything but suitable to the task. It was thin and dagger-like, it looked serrated, certainly not the broad, finely molded scoop the mallard had. The mystery bird's bill looked more predatory than the bill of the mallard, one more akin to a diet of animal manner than plant stuff.

It was one thing of many that made this pairing so compelling to watch. The possibility that the mallard might somehow have adopted the mystery bird came to mind. There were instances, like the clumsy dabbling, which suggested the mystery bird was learning survival behaviors from the larger mallard but doubts arose just as quickly... The mallard was a male. Wouldn't an adoption, however unlikely, at least need the cooperation of a female mallard? and where was she?

Then there were behaviors which showed the mystery bird was anything but some weak adopted stepchild, the most obvious of which was captured in this final photo... 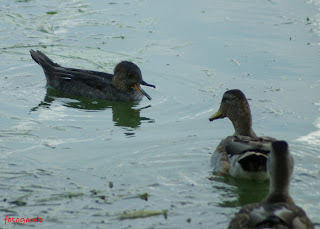 When other mallards came too close to "its" mallard the little mystery bird went on the offensive with aggressive displays and posturing. Without fail the mallards yielded to the smaller bird which was surprising given their proven record for eagerly initiating or accepting challenges to engage in physical combat. As seemingly aggressive and possessive of its mallard that the mystery bird was, the mallard was the leader of the pair. Those aggressive exchanges with other birds ended with the paired mallard calmly moving from the disturbance and the smaller bird following, once again a silent mimic of its larger companion.

I've never seen anything quite like it. I know many species of birds and other creatures can and do join in inter-species companionship and in some cases have hybrid offspring but it's not something one witnesses every day. I've never seen a mallard display such a close and obvious companionship with anything but another mallard.

After arriving home I loaded the pictures from our day at the park into my computer and began researching the identity of the mystery bird which led me to the Hooded Merganser, a guess confirmed by Whatbird users. If anything, learning the mallard's companion was a merganser only raised more questions. During subsequent research I've learned mallards have earned quite a reputation for cross-breeding with other species. In some parts of the world native duck species are in danger of extinction as hybrids will inevitably erase the rest if bird population numbers reach a rapidly nearing critical pivot point. I found a number of species listed as confirmed mallard crossbreeders but no mention of mergansers hooded or otherwise. Nothing I found indicated hooded mergansers crossbreed with any species and it seems unlikely they'd do so with mallards or similar ducks given the difference in diet and feeding methods. Mergansers are diving feeders whose diet is primarily animal material whereas mallards feed largely on plant material by dipping and dabbling.

Even discounting breeding as the reason for this mallard / hooded merganser partnership it's still a compelling companionship. How did these two birds come to be a pair? Why did it happen? The answers to those and other questions remain unanswered, maybe forever but that's part of the fun of birdwatching. Their are wonders aplenty supplied by our feathered friends and the lives they lead, it's impossible to know all the answers (and besides, where's the fun in that?) Knowing we were witness to something rare and wondrous is enough.

Some may scorn at the birdwatching hobbyist and consider it an exercise in wasted time and boredom but in that ignorance they are denying themselves so much. The wonder, excitement and personal fulfillment found in birdwatching is endless and good for the soul.

If you want to know more about Hooded Mergansers and Mallards check out the links below...