Who Was Gordon Gustav?

Who was Gordon Gustav?

It may seem a strange question to ask since at the time I write this it and every other entry in this blog is attributed to Gordon Gustav. That kind of suggests the question should be "Who IS Gordon Gustav?" but that isn't right either.

The fact of the matter is Gordon Gustav doesn't exist. He never really did.

But here's a picture of him anyway... 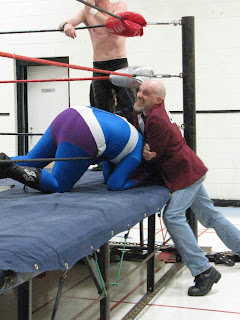 The name "Gordon Gustav" was given to me by a friend of mine, Jessy Jones. (That too is a pro-wrestling alias.) He's a well known local independent pro-wrestler (a heel) and the self proclaimed "King of Canada". Jessy created a very elaborate background for his wrestling persona, one rich with details about his "life" outside the ring in a kingdom of his design called "Sportopia" where among other things he was the leader of a religion by the same name.

Over the years Jessy has managed many wrestlers and almost always has a stable of cohorts willing to do his bidding in and out of the ring. He named this ever-changing group "The Sports Generation". Like many pro-wrestlers Jessy has a lot of nicknames (probably more than most wrestlers) and for years his most used nickname was "The Sport" hence the Generation variation to designate members of his wrestling stable and personal entourage past & present. Jessy wanted me to become a member of The Sports Generation (the Director of Foreign Affairs).

At the time I was managing a few different wrestlers in different promotions under the name "Gordo, the wizard of id" which was also the name I was known as by readers of my website Ontario Wrestling's Indy Elite (OWIE), a current news/ historical record of the local indy wrestling community (which no longer exists). As the owner/senior editor of OWIE I had a relatively high profile among members and followers of indy pro-wrestling and had been careful to do most of my wrestling-character work off the beaten track, working smaller shows or performing for promotions not considered "respected" by the majority of people involved in the local scene.

I had no desire to create conflict between Gordo, the wizard of id internet journalist and Gordo, the wizard of id nasty rule-breaking pro-wrestling manager and confining my in-ring activities to the fringe made it easier to keep the two identities separate. Doing the same while working with the "King of Canada" Jessy Jones and his Sports Generation was a different matter. Jessy was well known and working with higher profile established promotions like the Pure Wrestling Association (PWA). It would have been impossible to join the Sports Generation as "the wizard of id" without some inevitable conflict between that character and the character running what was considered a fair and unbiased "news" website covering the local scene. Jessy Jones solved that problem by dubbing me Gordon Gustav.

It was soon after I began appearing as Gustav that I discovered this blog site and created the "Pro Wrestling Brain Salad" blog with the intention of using it to deliver in-character Gordon Gustav rants. When I created my Blogger Profile it wanted a user name and it made sense (at the time) to use the Gustav name since it was as that character I intended to write. Then I wanted another blog, one not having anything to do with wrestling, this blog... "Dew On The Newts". As it turned out, I wasn't able to have two blogs under two names in the same Blogger profile. Nor could I create another Blogger profile (since I already had one) so it came to pass that Dew On The Newts was written under the name Gordon Gustav too.

That will no longer do.

I haven't written anything in the blog I created for Gordon Gustav in a long time. I don't even have Pro Wrestling Brain Salad bookmarked among my favorites. I know it still exists because I see links to it on my profile when I log in. I've been a lot more active in this blog and that's why Gordon Gustav has to go. This blog is about real life, not some make-believe pro-wrestling universe. It's real, it's honest and it's me.

And I am NOT Gordon Gustav.

I have a real name and I'm willing to have it stand behind everything I write in this blog. Because this is real. This is me being me. Dew On The Newts isn't rants or opinions from some pro-wrestling character. It isn't written by Gordon Gustav. He doesn't exist, he never did.

I'll be changing my Blogger profile to reflect my own name. I'm not sure if that will change the credited authorship of all the posts I've made under the name Gordon Gustav (hence my comment at the start: "at the time I write this...") I don't really care. What I do care about is standing behind whatever I write about... whatever opinions I express... whatever judgments I make. I don't need to hide behind a nom de plume be it Gordon Gustav or anything else. I never did.

By the way... the photo of Gordon Gustav was taken by Tabercil Whom (Another alias?)

And speaking of keeping things real...
Check out A Hero's Call. It's written by my friend Osiris (Actually, his name is Jon.)
Posted by Unknown at 4:41 PM