Debuting FEB 27th FIGHT BRAND is "Bringing the fight to downtown Toronto." Not a lot of detail about Fight Brand but my sources confirm it is a legit promotion and will feature some of Ontario's best pro wrestlers.

Debuting April 10 2011 at the Toronto Underground Cinema – 186 Spadina ave. Toronto ON WRESTLE CRISIS promises to bring "COMBAT OPERA" to fans. Their website indicates they are a division of SQUARED CIRCLE WRESTLING. Either that or this is a VERY elaborate promotional set-up for one show. The website lists a roster of Combat Artists that includes SCW wrestlers (& SQUARED CIRCLE TRAINING alumni) like Sebastian Suave, Boris Brezhnev, Bang Bang Pete, Anthony Fiasco, Brent B, Ali Atish and more plus others like Anthony Darko, Amazing Darkstone, Jessy Jones and Mentalist Mysterion. 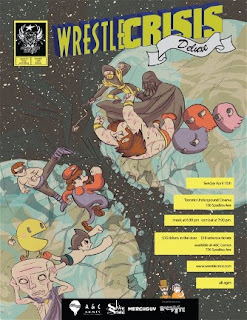 Fight Brand and Wrestle Crisis coming to Toronto, Ontario, in 2011.
Check out Ontario Wrestling's Indy Elite for all your Ontario indy wrestling news!
Posted by Unknown at 9:14 AM