a Bird in the Hand - I Believe in Miracles

Almost everyone is familiar with the adage "A bird in the hand is worth two in the bush". Most people interpret it to mean a secured thing, one in your actual possession is better than a potentially better thing that isn't secured or not yet belonging to or held by you. Some people paraphrase it as "be happy with what you have, don't get greedy and try for more." Pretty much everyone agrees the implication of the bird-in-the-hand adage is trying to attain the better or more desirable thing (the 2 birds in the bush) may cause you to lose the thing you already do have (the bird in hand) and you'll wind up with nothing (because all the birds will fly away.)

I've never really pondered the meaning of  "A bird in the hand is worth two in the bush" since I first heard the phrase years ago. I don't remember where or when exactly, maybe in school, but I do know I always agreed with the general consensus that it was about the folly of greed and how wanting more of something can lead to having less of what you already have... and I'm not writing this blog today to argue any differently or even to talk more about that old adage except to say the reality of having a bird in hand was to me, priceless. 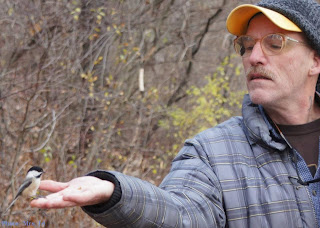 I recently had a bird in my hand. A few different birds actually and the experience was... amazing.

It happened a couple days ago on an outdoor walk with my wife and dog, one described in some detail in the preceding blog entry Neither my wife or I can recall ever having wild birds perch on us (with the exception of some Stanley Park pigeons which hardly qualify as "wild", at least by my reckoning.) We do a lot of exploring in the wilderness areas around Hamilton and birdwatching is a huge part of the activities we enjoy. As a result we've seen a lot of birds but before that magical day at the Hendrie Valley Sanctuary none of those birds we were watching ever landed on us. Nearby maybe but never actually on us.

My wife was the first to have a hands-on (on-hand?) experience with a bird when a chickadee alit on her upraised palm. It stayed there only a second, barely long enough for us to grasp that a bird had actually landed on her! We were both elated but she was ecstatic at what just occurred. Seeing her look of wonder, amazement and joy nearly melted my heart and I was disappointed about not getting a picture of the magic moment which induced it. I had my 300mm lens on and was standing beside her, way too close to enable a shot even if I had been able to raise my camera to my eye before the chickadee took wing again.

Soon enough we figured out the chickadees (and a white-breasted nuthatch) were looking to us for a free meal. Accustomed we presumed to being fed by park visitors the birds were very comfortable being in the presence of humans (accompanied by a dog no less - a chihuahua, but still.) I was lucky to find an old granola bar deep in a jacket pocket which supplied crumbs for Tammy to offer our new park friends. This time I would have camera ready... 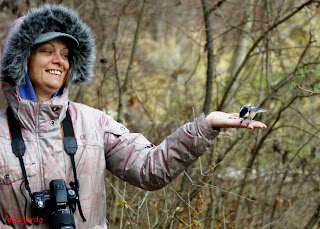 It was an indescribably awesome thing to watch and photograph my wife hand-feeding the nuthatch and chickadees. She was so happy, completely enthralled by the little feathered creatures jumping from bush to bush, branch to branch as they approached, flying around her, hovering over her, perching on her! I was also enthralled with wondrous joy watching her experience this first-in-a-lifetime event. Seeing my wife surrounded by and interacting with those birds was deeply moving on an emotional and spiritual level. My happiness at what she was experiencing during those bird-filled moments provoked an awareness of how deep and strong my love for her is. At the same time came a clear and true spiritual realization - miracles don't just happen, they exist.

That first spiritual surge was brief, just a quick sure knowledge - more feeling than thought - everything and every thing is connected. It wasn't until Tammy suggested I try feeding the birds and I too beheld the wonder that is a bird in the hand that the spiritual connection again became apparent. The knowledge that miracles do exist, that everything is intrinsically linked to everything else. The evidence was right there in my hand...

The actual physical sensation of a chickadee landing on my hand was very light. Aside from a slight tactile sense of its feet touching my skin there was no evidence I could actually feel. I had no sense of the bird's weight when it landed on me. Take-offs sometimes brushed air across my hand but there was no feeling of any weight being lifted. Chickadees aren't weightless of course (1/3oz or 9-12grams according to easily-Googled literature) but they're so light they might as well be. Even the relatively larger and heavier white-breasted nuthatch's weight (20 grams or so) barely registered... although their take-off launch did shove against my finger with enough force to indicate separation between us. The touch of the birds was so light I have to wonder if I were blindfolded, unable to witness by sight the wonder of a bird in the hand, would I know they were landing on me at all?

Actually seeing a chickadee perch on my fingertip was truly amazing. Awe inspiring (even if in the photos I look a little less than awe-struck. Bifocals, folks. In order to see the birds in clear focus I had to tip my head back.) I couldn't look at that bird perched on my finger without concluding I was witness to a miracle in the happening. When I realized the chickadee was looking back at me I knew for sure. In that moment I sensed the connection... the spiritual bond that binds everything together... the singular energy source within every atom and the space between.

Some truths are too large in scale for anybody to grasp. I gained just a whisper of real knowledge framing the moment I and the chickadee in my hand assessed each other... the barest glimpse of truths beyond the understanding of mankind. I don't know if there was a message or lesson in that moment for the bird but for me it came down to this: I am you and you are me and we are all together. There's more to it than that of course but that's the feeling I got during that moment of bird-in-hand. I didn't think it. My thoughts at that moment were more akin to something like "Wow! This is AWESOME!"

And before any of my regular readers start thinking I'm off on some kind of God and faith sermon... relax. This isn't about that. I'm not preaching anything. I don't think the bird was some kind of messenger of God. This bird, and all the other birds I saw that day including the ones who didn't fly over and land on my hand were just birds. The bird wasn't looking right at me like the American Kestrel I spoke of in an earlier blog. The little chickadee was looking at me like he was just checking me out, comparing me visually perhaps to other humans encountered in its past. When he was done that he grabbed a crumb from my palm and split. 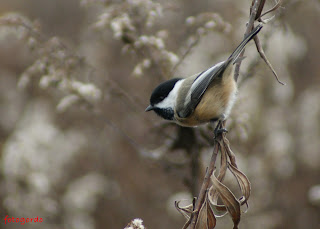 It was like that with the other birds that came to my hand during those magical minutes I offered them crumbs. Not all of the birds paused longer than it took to grab a crumb of granola but some did. That they initiated contact at all was amazing. We saw other people handfeeding the birds that day and I did find out later that the chickadees and Nuthatch's of Hendrie Valley park are known to be "hand-tame" (which probably explains why those other people all had regular wildbird-safe seed with them. And, when you think about it... just who trained who here?)

What, you don't believe in miracles? Too bad. Not believing in miracles is like seeing the world from the inside of a windowless bus. I know. There was a time when I didn't believe in miracles. Now I do believe. I believe they are everywhere all of the time. Miracles are within us, all around us. We just don't see them for what they are because we as a species have blinded ourselves to their existence.

Believing in miracles is the only way of having a chance at recognizing one when it occurs. Given how much we've used our freedom of choice (the gift of self-awareness) to distance ourselves from life's real truths it's a miracle our species is still here. It's a miracle you are here. And if you still have doubts consider this...

You are but one of over 7 billion humans alive today. And all of them (you & me included)... the entire human race equals an almost immeasurable fraction of the collective biomass of organic species clinging precariously to life on the thin crust of a planet 12,600 km wide, a planet traveling 107,000 km/hr around a star 100 times bigger. And that star is traveling around a galaxy with 200-400 billion other stars and it is spinning through the universe among an estimated 100 billion other galaxies.

In all that vastness of creation it took a miracle for you to even exist and yet...
here you are. Is that not a miracle?

I can't explain the miracle presented during my interaction with the chickadee. I barely understand it myself. Suffice it to say it was a very humbling experience, one I will have to devote much thought. I'm not suggesting literally having a bird in the hand will provoke a similar experience for anyone else but it can't hurt... hand-feeding the birds... slowing down for a moment... turning toward the natural world around us... 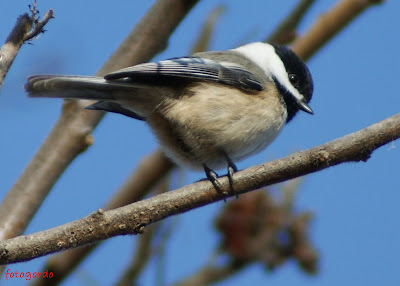