Beavers are Canada's national animal, an honor shared since 2003 with the Canadian Horse and one currently under attack by proponents for Polar Bears who feel beavers are too representative of Canada's "shameful" colonial past. Anyone who uses cash money knows the beaver is on our  nickel. They are generally regarded as "hard-working" because of their dam-building prowess but aside from that, it's a safe bet most Canadians don't know a lot about them.

Most people probably don't know beavers are Rodents, the world's 2nd largest in fact. Only South America's Capybara is bigger than our beaver. The "Capy" can weigh in at 150lbs while the beaver generally maxes out these days at 55-70lbs. Back in the days before white people showed up and the beaver was trapped extensively for its rich pelt there were an estimated 90 million living in North America. Back in those days the largest beavers weighed over 100lbs. Now there are an estimated 6-12 million beavers in North America.

Although beavers are still considered common in many areas of Canada including southern Ontario many people have never seen one. A drive through almost any rural or wilderness area within 50kms of any Southern Ontario city will likely provide many beaver dam and lodge sightings but actually seeing a live beaver is something the majority of people in Ontario cannot truthfully claim, especially those who live in cities. 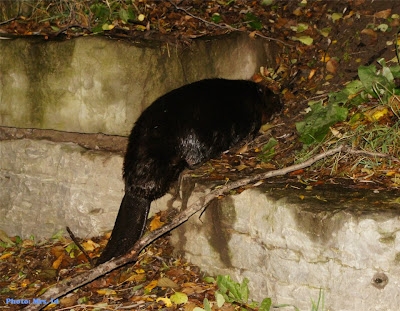 Beavers have certain needs like water and a good supply of the trees from which to get food. They build dams. Habits like those make the beaver an undesirable pest to many municipalities and it's not unheard of for Canadian cities, towns and villages to wage a war of extermination against them. Some urban centers tolerate beavers and while they may take steps to limit their destructive potential, like wrapping trees in wire, they generally don't actively hunt and destroy the aquatic rodents unless their dams impinge on water drains or cause flooding.

Hamilton is one of those "beaver tolerant' communities. Being situated on the westernmost shore of Lake Ontario and abutting the Royal Botanical Gardens Conservation Area and other wilderness preserves makes "The Hammer" a prime candidate for beaver habitation. There are beavers living in Hamilton, some within 5 blocks of downtown, but it's unlikely many Hamiltonians have ever seen one. Beavers are nocturnal for one thing - they do the bulk of their activities at night, and when they are up and about they spend most of their time in the water.

I know from experience that it's rare to see a beaver in Hamilton. My wife Tammy and I have spent hundreds of hours over the last 10 years exploring the city's waterfront parks, most of that in Princess Point and Bayfront Park (the two are joined by the 3.5 km "Waterfront Trail") but up until Oct 27th of this year we never saw a live beaver. We've seen lots of evidence of beavers, teeth-grooved stumps and gnawed branches and logs can be found all around Bayfront Park. Many of the planted trees have chicken-wire barricades encircling their trunks. Some of the beaver sign is very old but there are fresh cuttings all the time and there was a beaver lodge built last fall on the edge of the Cootes Marsh outfall, under the York St Bridge.

What there isn't is the most obvious of beaver trademarks... a dam. Apparently beavers can live without making a dam... or even a lodge because we've never seen a beaver dam anywhere in Bayfront Park. There was a single lodge built up against the bank where the canal from Cootes Marsh (under the York St Bridge) meets the western edge of Hamilton Harbour. Despite there being no dams and even without the lodge it was obvious from the other evidence (chewed trunks, fallen trees etc) that beavers did indeed inhabit the area in and around Bayfront Park.

Beaver have proven to be the most elusive of the mammals inhabiting our two favorite parks. We've seen deer, squirrel, chipmunk, raccoon, muskrat and mink but not until late last month did we see our first live beaver. I say "live" because we did see a deceased beaver in the summer, a small one, just up the canal from the lodge. That lodge wasn't huge and well built like most beaver lodges I've seen. It fell into disrepair through neglect and human abuse in the weeks after seeing the dead beaver. After the initial sadness induced by seeing the dead beaver we reached a kind of acceptance we'd never actually see a live beaver on our waterfront adventures (but we do get excited and reach for the cameras whenever we saw new evidence of their existence... like this newly fallen tree we saw today, Nov 4th, in Princess Point...) 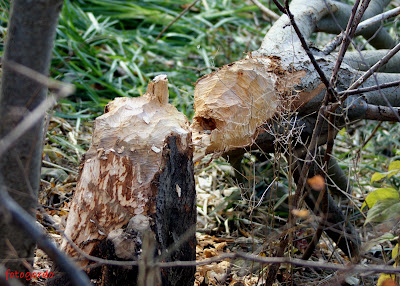 It was Saturday, Oct 27th of this year when Tammy & I saw our first live beavers in Hamilton. It had been raining for most of the day. We'd taken our Chihuahua Isabeau on a wet, rainy walk earlier in the day with mixed results. As dusk approached the rain stopped and we jumped in the car for a 5 minute drive to Bayfront Park in the hope an evening "adventure" would make the dog comfortable enough to poop in wet grass. (Go ahead, laugh. You're legs aren't 4 inches long.) We also took our cameras because, well, that's what we do. Not that I was expecting to see much opportunity for anything except shots of the water in the rapidly fading light.

On our walk up the path Tammy and I did get some photos of the water and shoreline and Isabeau had a poop (dutifully scooped & properly discarded) so when we reached the point where the path curves around the beach area we elected to turn around and retrace our steps. It was going on to full dark by then, most of the available illumination was from the lampposts lining the path. On a whim we decided to walk down a gravel path, one of 4 that arc to raised waterside areas before rejoining the main paved path. The smaller path went down a slight incline before widening into the area where the lake waters lap against the rows of armor stone which elevate viewers 3-4 ft above the water level. Just as I neared the bottom of that slight incline I heard a noise behind me then Tammy said "Omigod, there's a raccoon right there! No, it's a beaver!"

It was a beaver! And it was huge! It had climbed up a tunnel exploiting the gap between a couple of the big armor stones that ring Bayfront Park acting as erosion guards. Tammy scooped Isabeau up in one hand and had her camera in the other but the beaver didn't seem concerned about the dog or us. I was unencumbered by a canine but was having no luck with my camera as my flash doesn't work. Tammy was able to get off a couple of shots which accompany this entry. (I managed a couple smudges that sorta, maybe, might look like a beaver.) While it would have been nice to get a picture perfect record of what we saw the fact is, we were witness to something very special, something not everyone gets to see... 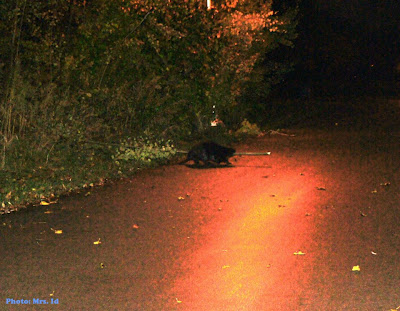 The beaver passed by us and scrambled up the embankment to the main paved path, we quickly moved back up the path to follow. As we got to the main path the beaver was just entering the bushes on the other side. We could see shrubs and small trees moving then heard a loud SNAP! A 12-15 ft tall tree fell over and seconds later the beaver reappeared on the path with the trunk of the tree clamped in his jaws. In no time it dragged the tree across the path, down the bank and over the armor stone into the lake where another smaller beaver had been swimming back & forth the whole time.

It was an experience that lasted maybe 2 minutes but what a fantastic couple of minutes it was! A real live beaver! Falling a tree and dragging it to the water... right in front of us! That this happened within a mile of where we live, just a few blocks from the downtown core of a city with half a million inhabitants makes it even more wondrous! I still can't get over how lucky we were to have seen such a thing!

Hamilton is awesome! Peregrine Falcons, Red-tailed Hawks, American Kestrels, Great Blue Herons and other birds nest within the city limits, some right downtown. Coyote, raccoon, deer, muskrat, mink and beaver all live in Hamilton, a city with a reputation for being dirty, stinking and sterile. In my 10 years here I have seen all those myths dispelled and I'm continually surprised and amazed at the things I see. I love this town!