Dear Derek & Stuart, Your Grandpa is a Jerk

I know you boys and your Grandpa like Hamilton's Bayfront Park. I don't blame you, it's a wonderful place. It would be a better place if your Grandpa stopped writing graffiti all over it. I'm sure you know what I'm talking about... all the little messages and love-notes to you boys which he puts all over the park. 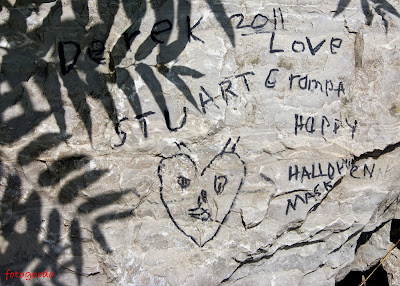 You've seen this, right Derek & Stuart? This and a hundred more just like it are scattered all around Bayfront Park. Your Grandpa uses his permanent marker to scribble messages to you on the rocks along the lakeshore walk. He even writes stuff on trees! You may think it's cool that your Grandpa thinks enough of you to leave you messages in the park but it's NOT cool. It's something a jerk and a vandal would do.

What makes your Grandpa think it's okay to deface public property, to scrawl his notes to you all over a park that belongs to everyone? Nobody else wants to see that. People come to the park to enjoy the nature and beauty it offers. Why should we all have to see the garbage graffiti your Grandpa leaves for you? We shouldn't have to walk by endless messages to you boys. It's not right and your Grandpa is an arrogant, thoughtless JERK (and a vandal) for doing this over an over again.

His cute little messages to you boys are seen as ugly little scribbles by the rest of us park visitors. There is no escaping them, they're everywhere! And, unlike regular garbage that can be picked up and removed your Grandpa's garbage graffiti doesn't go away. Messages he left you in past years are still visible and still as ugly today... like his 2011 Christmas message... 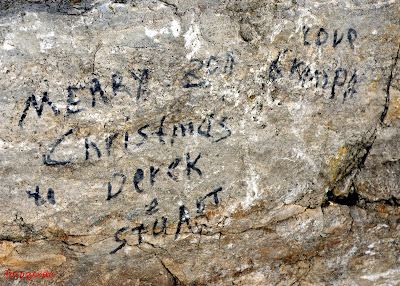 I hope you learn better things from your Grandpa than what he's teaching you with these notes and messages. I hope you realize it's NOT okay to vandalize and deface public property. I hope you boys won't grow up to be jerks and vandals just like your Grandpa but what I really hope is that somehow MY message gets to you... and your Grandpa. It's a simple message...

I hope you boys realize what your Grandpa is doing is wrong. I hope you tell him to stop ruining the natural beauty of Bayfront Park (or anywhere else). I'd like to tell him that myself. I've tried to spot your Grandpa in the park because I'd like to catch him in the act, writing another message to you boys. I'd have a word or two for him about his vandalizing ways. To be honest, I'd love to shove that permanent marker of his right down his throat.

And so, Derek and Stuart, there you have it. Your Grandpa is a jerk and a vandal. It might be unbelievable news to you but thousands of other park users know it to be true. You boys are old enough to know what's right and what's wrong. (I've seen your ages in his Birthday messages to you) You must know in your heart that what your Grandpa is doing with his marker in the park is wrong. Isn't it time you told him so, time to tell him to stop it?

You boys may not know me but trust me when I say it would be better for your Grandpa to hear it from you than hear it from me up close and in person. Seriously. I can be a real jerk too, especially when I'm defending something I love... And I love Bayfront Park. I hope your Grandpa stops his evil ways soon because if he doesn't the odds are, sooner or later, the two of us will cross paths. The result for your Grandpa will be far uglier than any of his garbage graffiti. Trust me.