Ronald Reagan was President of the United States from 1981 to 1989.

In 1983 100 Huntley Street broadcast a weeks worth of shows live from Washington DC as part of series called "The Maple Leaf Salutes the Stars and Stripes". The series was their way of saying 'thank you' to the U.S. for being a good neighbor. (James 2:8 "Love thy neighbor as thyself") As it happened, that week saw First Lady Nancy Reagan celebrate a birthday so the cast and crew of 100 Huntley Street sang "Happy Birthday" to her on the show broadcast on that date, (a Wednesday). On Friday of that same week the show received a letter from President Reagan wherein he wrote about the shared ideals of Canada and the U.S. and their relationship.

While touring 100 Huntley Street's Crossroads Centre in late September I came across that letter framed and hanging on the wall amid other messages and testimonials to that organization. I was struck by Reagan's words, the impact of his description about the relationship between Canada and the U.S.. I doubt very much any recent or current Canadian or U.S. government leader could claim our countries share the same relationship today.

And that's too bad.

Take a moment to think about where Canada and the U.S. are today, our economies, our commitment to the ideals upon which our nations were founded, the relationship between us now, the uncertainty of our shared futures...

Then read President Ronald Reagan's letter to 100 Huntley Street printed below (in bold & italics) and see what all of us have abandoned... in my opinion, to the detriment of us all.

Nancy and I are most proud to send our warmest greetings to the people of Canada on the occasion of this very special program, "100 Huntley Street," which honors the long friendship between our two countries.

Through the year our countries have grown and prospered. Working together we have developed our economies, and the living standards of our people are the envy of the world.

Our success stems from the greatness of the people and their dedication to time-honored moral traditions upon which our nations were founded. They may achieve all that they will in a system that is free from government oppression. In America and Canada the opportunities for success abound and are available for the asking.

God has blessed us in so many ways. Because of our good fortune we have never hesitated to share with others in time of need -- at home and abroad. When famines, natural disasters, or wars occur, our people are battling to help and sharing whatever we have with our neighbors. The apostle Paul wrote in 11 Corinthians: "But in all things approving ourselves as the ministers of God, in much patience, in affliction, in necessities, in distresses."

We've never been perfect, but no one can say we haven't tried our utmost to make the world a better place.

The United States and Canada are as two close brothers, always working together for the good of the entire family. If it were possible for all nations to maintain the warm friendship or achieve the level of trust our two countries enjoy, the world would be the peaceful place the prophet Isaiah foretold: "and they shall beat their swords into plowshares, and their spears into pruning hooks: nation shall not lift up sword against nation, neither shall they learn war any more."

The people of the United States are grateful for the long friendship our countries have enjoyed. On behalf of all Americans, we send thanks to our brothers and sisters to the north and wish them the best always. 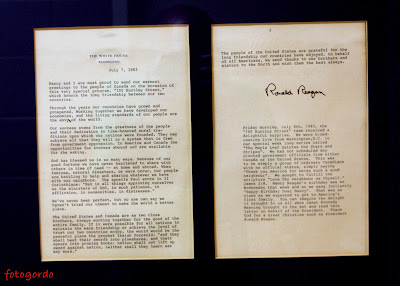